Before I tell the first tale I have a (dis) claimer.

Strange, wonderful and mystery describes best my 60+ trips into canoe county wilderness. My first trip led by an extreme risk-taker wild man launched me into my own adventures creating hundreds of stories. The hazards of time and memory make them “mostly true”. Some are so unbelievable that that I quiet down the truth a little to make them more believable than true.

Day two started in the fog and ended up in the dark. We were behind schedule. I had not yet figured out that schedules do not work well in the wilderness. I roused eight teenagers, broke camp, packed everything into 6 packs and 3 canoes, made a quick breakfast and we were paddling the big water of Pipe Stone bay of Basswood lake BWCAW. Note to self “no more packing tents by 5:30 am.

Hit By Lightening. We reached the Canadian border mid-morning and tackled the Basswood river and portages (cheating on some…not recommended as canoes, fishing rods and sometimes people are lost here). A very nasty thunderstorm forced  us unto an island in the middle of the river where we ate trail mix while getting drenched. I asked everyone to put the packs under our overturned canoes and stand on rocks under the smaller trees and avoid roots as lightening seemed to be all around us. A bolt of lightening hit a tree higher on the top of the island and the kid I was talking to had disappeared. He was on the ground completely immobilized. I should have noticed he was standing in a puddle of water and not on a rock. It took about five minutes for him to stand up and talk. We figured out later that there was about five minutes of his waking minutes on the trip that he didn’t talk. I believe later in life he became an insurance agent like his father.

A 27 mile day. After the river and portaging around lower basswood falls we began to look for a camp site.  Crooked Lake is not loaded with camp sites and it seemed the border water was popular. We traveled most of the lake before finding a camp site in the dark. We made camp, built a fire to cook over, set up tents, hoisted the food pack higher than a bears reach between two trees and went to bed. Somehow I managed to talk the group into sparing my life by promising sleeping in till noon, catching fish for a brunch, a sunny day with the wind at our back and quite a few other miraculous things that probably wouldn’t happen.

More Strange things happened. I woke early. Long before the promised late breakfast. Still, heavy fog, medium size frogs everywhere, fish rising and a few distant birds hardly disturbed the eerie morning. I remember that it felt spooky but not enough to keep me from putting on a lead head jig and a  live frog to catch some fish. Some day I hope to camp there again as there was a small-mouth bass caught on every cast. I found some stepping stones out into the lake onto a five foot long rock barely sticking out of the water and caught a nice bass when I began to feel that something was very wrong. I froze and listened but heard nothing. The water began to move around my feet as the other three quarters of the rock I was standing on was moving into the lake. My whole body turned into shaking rubber while trying to stand on the remaining  small rock as a monster snapping turtle moved into deeper water. Back at camp a girl screamed and I found my legs working again to see what was wrong. A big snapping turtle was crawling between the tents. We would see three more turtles in the water by camp before leaving after brunch. maybe I won’t camp there again. 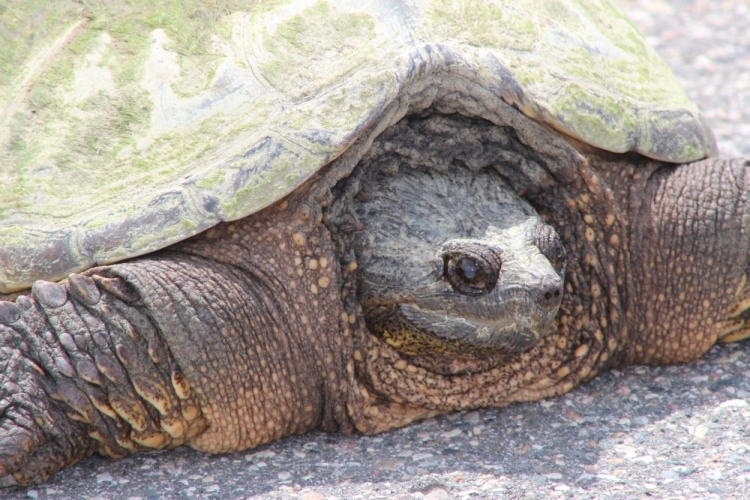 The worst and best was yet to come. This trip would introduce me to the most mysterious area of all a couple days later. I have purposely sought out adventure. It’s a beautiful, adventurous, harsh wilderness all at the same time. It can also be painful and deadly. I have gone to seek God, find ones self, and catch or lose the biggest fish ever. I have often had to face my fears or just a crazy bear claiming my food, conquer or fall on a portage trail, face 100 mph winds with trees flying or dump in monster icy waters. There is much more to tell. This odd 30 hour tale sets up more drama and mystery for My Wilderness Stories Mostly True (2)”