New ice in northern Minnesota. Literally a thin skin on the water with unbelievable strength. Four inches of clear ice and a small car can drive on it (if there are no cracks, thin spots, snow ice, no wind to buckle it, no springs underneath, you don’t drive too fast, and other unforeseen issues)  if you feel lucky. Don’t go blaming me if you try it and it doesn’t work out. It’s a good way to meet your maker sooner than later.

I took this picture from my fishing hole. I pulled many fish out of the lake and put most of them back to get bigger if they don’t freeze out this year.  I am always amazed at winters underwater world. I’ve seen turtles, muskrats, several species if fish, dozens of water bug species, clams, crayfish, and clouds of freshwater shrimp in one small hole in the lake throughout the winter. It’s a unique civilization under the frozen skin. Today the muskrats wanted to use my ice hole for a breath of fresh air. Scared me four times. 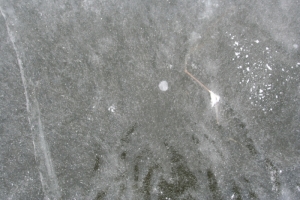 I’m standing on some milky ice dotted with air bubbles, expansion cracks, and a reed here and there. This is what I go by to see the thickness and stability of the ice. Safe for an ATV (probably). 10 rotations with the hand auger and I am through. Good enough and glad I walked out with spikes in my pockets.  It’s cold and the ice is cracking as it freezes deeper. I took 6 pictures before the camera battery quit in the cold air.

I’m the predator to the world under me. All I need is a temptation device and a hook. Nine succumb. Fish aren’t very smart. They live for the moment and merely react to the lure as they prowl the weed line.

Our world is not much different. Most of the predators are visible and we just think we are smart. There are plenty of things that hook us. Some of them kill quicker than others (I bet you can come up with a list without my help). Most require a huge struggle to get out of its grasp on us (I’ve had fish get away but not many).  I’ve had fish get off my hook only to turn and hit my lure again. I’ve caught the same small fish over and over (identified by a hook mark or scar) and had to relocate it to fish in peace. We all know people like that.

Many people don’t believe in Satan or the existence of demons or a devil. Some think you cannot really know if there is really a God or spiritual realm outside of us.  I guess I’m just simple enough to believe the biblical accounts which were unchallenged in their day. Simple enough to believe there is both a God and a Satan who have drilled a hole from the infinite into our little finite world. We are forced to choose between the two. A “no” choice is merely a default choice because we are not perfect. God’s rules.

What does ice fishing have to do with Christmas? It’s really simple, however, it’s a spiritual concept. If we could become a fish and somehow communicate with all the other fish that the DNR is draining the lake and they are all going to die from winter kill one of these years would it work? “Hey, the only way out is to go over the small dam at the end of the lake and go down river to the next lake.” They would probably eat us instead. Seems to be the way of fish. So it is with the people of Jesus day not realizing He was the way to God. His life for theirs was and is the only way out. Somehow it doesn’t fit well with the really smart people (ow, I bit my tongue).

Here are my questions. Forget what your reaction is to what I just said. Is life going to work out for you in the direction you are currently going? Will you die content (in our world we all die)  knowing love, joy, peace, and hope? Are you sure? Comment on what you are sure of!

2 thoughts on “Ice Fishing and Christmas”