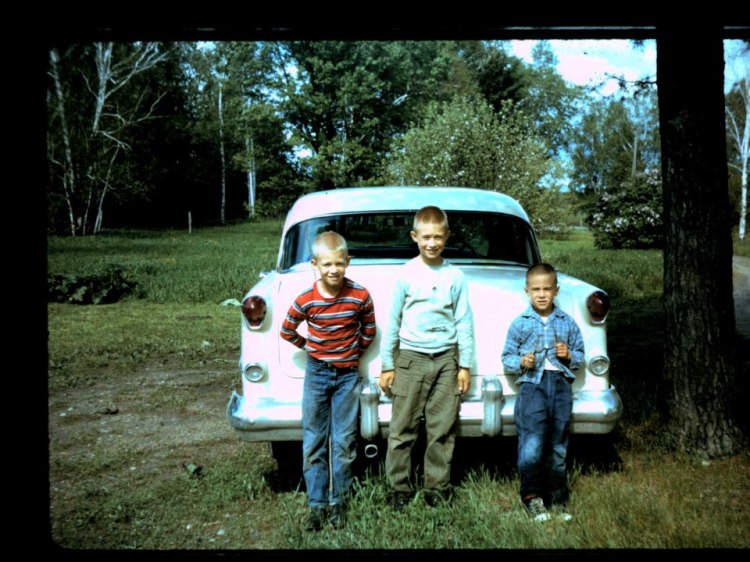 We were young once. Almost half a century later some of our stories (even the true ones) might sound a bit far fetched. By the time this picture was taken we drove the tractor and the pick-up on the farm. We milked the cows by hand, made home-made slingshots, dwindled the farm-yard chicken numbers as well as some of moms canning jars and some windows. The red tailed hawks in the area took the blame on the chicken numbers but somehow, our parents always seem suspicious.

We lived in Northern Minnesota where fields, forests and water could be exploited daily. Our creative energy and resourcefulness was only bound by our lack of time spent thinking things through. We discovered that climbing a very tall and very skinny tree to the top made it gracefully bend down to the ground and spring back when we let go. The bigger trees only let you down halfway, and the wrong species (most of them) broke off just below your hands when you threw your body out sideways to begin the exhilarating decent.

One of our brilliant breakthroughs (and I still don’t think it was my idea) came with the discovery of logic. If one kid could bend over a small 15′ tree by swinging the top over just think how big and high a tree three little people could bend to the ground. Cousin Vern (who was much bigger than us) was persuaded to climb to the top of the “perfect” monster tree first while two of us followed. Giddy with excitement we counted to three and threw our bodies sideways towards the setting sun. The familiar “Crack” of breaking wood had all three of us flashing Vern’s life before our eyes as two of us lit on Vern unharmed. We figured Vern was dead as he was not breathing. I guess it took a while for his lungs to figure out how to get some air. We asked him if he saw Jesus and judging by his look it wasn’t Jesus.

Vern taught us how to play “chicken” with our bicycles. Everybody and everything lost. We healed but the bikes were never the same. I guess Vern expected to win at that one. I remember Vern conceding when I said “two out of three?” Yep, you are catching on…slow learner here!

My brothers seemed to escape pain more than me for some reason. One was reasoned off the peak of the barn roof to try the umbrella thing from a lower starting point. I might have jumped before reason began. We learned to pole vault with a long and stout stick in the barns haymow area unto the second story ledge; well my next two younger brothers learned anyway. Both went on to set records in that event in high school. I quit trying after I missed the soft landing area. We could grab a stout stick and pole vault our cattle fences but found out the cousins from the city couldn’t. One even tangled himself in the barbed wire electric fence. The cartoons are correct in the facial expressions and hair standing on end renditions of this predicament.

Life was good for me growing up on a farm until my worst of all encountered accidents. Most accidents have a certain recovery time and it’s back to the adventures again but this one changed who I would become and what I would do forward. After milking the cows we would carry the pails into the house. In the basement we would put the milk through an old hand crank cream separator by pouring the milk into a bowl on top, turn the crank at a certain rate  and the crème and milk were separated. We found that a circular saw blade fit perfectly on the top spindle. One would crank and the other could saw. we graduated from paper to small wood pieces then 2″ thick wood.  At 11 years old I could really turn that blade.

I was cranking when the saw blade came off and cut across both my arms near the elbows. My median nerves were cut, I saw my bones instantly and then a river of spurting blood. I don’t remember but bits and pieces after that but I ended up in extensive surgery after a dash to emergency and a 100 mile ambulance ride. A neurosurgeon happened to be on duty that night so he tied my nerve ends together. Veins and arteries were also sewn and tied as well as the arms. No feeling below the elbows, except for pain and mostly numbness for a long time.

Scars just are.  They verify the craziest of stories behind them. We are fragile and resilient at the same time. I have a unique sensitivity toward the stories behind scars. I identify with Jesus Christ telling a doubting Thomas to reach out and touch his scars and believe that the story of his resurrection was true. I also identify with Thomas the skeptic until he saw the scars. All this from whence we came, and we know where we are going.

Now almost a half century later I see a few kids (but not many who get beyond their phone or pad) who could be tree benders. Kids who would push out an old forsaken boat onto a lake with a couple of oars and one would fish while the other bailed water to keep from sinking. Kids who will someday become psychologists, managers, teachers, youth directors, personal trainers, nurses, and great upper management (my siblings). Kids who would become followers of Jesus because they believed the scars like Thomas even though it’s been a couple thousand years. 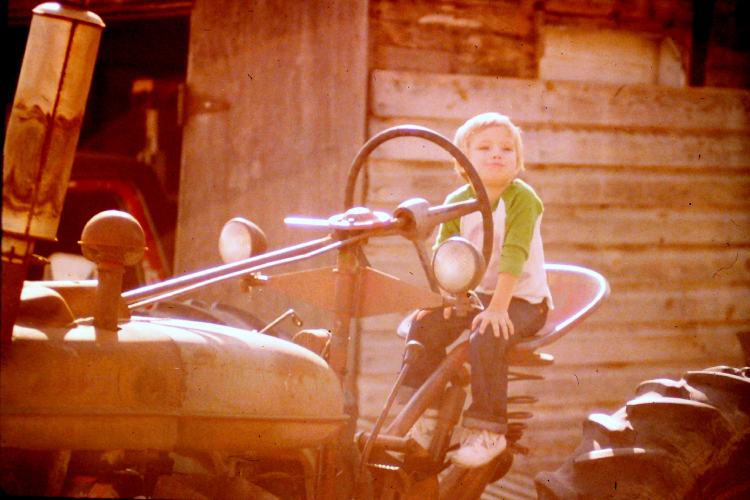 24 thoughts on “From Whence We Came”